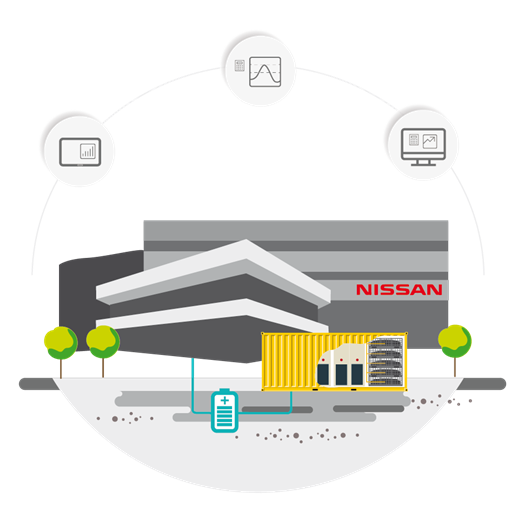 
In April 2017, the personnel of Nissan Europe SAS moved to a bigger and more modern building in the city of Montigny, near Paris. The building has more than 12 000 square meters of office area, 800 workstations, 500 parking spaces and about 100 EV charging stations. The maximum electrical consumption of the site is a bit more than 2 MW.

A container based battery system is installed on the premises allowing to experiment with the implementation of relocatable storage. The battery system has the following general characteristics:

Interviewing our ELSA team at Nissan

What is the special focus of the ELSA pilot site at the Nissan Europe Office Building?
The Nissan pilot site will focus on testing the battery inverters developed in the scope of ELSA. The main focus will be on the system scalability, i.e. working with a number of inverters in parallel and validating the communication between the units and the Energy Management System.
You are trialling the application of the ELSA battery storage system at building level. Which services is the ELSA battery storage system providing at the Nissan Europe Office Building?
At the Nissan Europe Office, we will test two use cases at building level, focusing on the optimization of the electricity consumption:
What are the long-term benefits you expect from installing a second life battery storage system?
We expect to lower the price of the Energy Storage System by developing the power electronics system based on existing technology and "on the shelf” components and also by using 2nd life batteries.
We expect that we will be able to validate the economic viability of the Energy Storage System by reducing the electricity bill and by creating value through providing services to the grid (e.g. provide flexibility to an aggregator for balancing services).
Furthermore, the use of second life batteries will improve the environmental footprint of the batteries and the EVs.